Philosophy bakes no bread, but it has given us God, freedom and immortality.
~Novalis

Sponsorships
Inspired by the work of Al Poulin, The Bishop Butler Society supports the publication of poetry that helps to uncover and make better known the root metaphors of our life and language. Poulin’s work and legacy remains essential to the seeking of truth without being ashamed to learn from anyone which young Joseph Butler declared to be the business of his life.  Poulin's poems balance philosophical inquiry with emotional intensity, calling with fidelity of voice for an awakening of the mind, courage of spirit, and the skillful use of the body of flesh and blood (with its mechanical and electrical extensions) directed at navigating in this wicked world with ethical ambitions and moral means.

Tiger Bark Press is a non-profit organization which depends on grants and donations to bring to the public important works of literature that might not otherwise see publication.  Steven Huff, the founding publisher and editor at Tiger Bark Press, teaches creative writing at the Solstice Low-Residency MFA Program at Pine Manor College in Boston. He is the author of three collections of poetry, including A Fire in the Hill (Blue Horse Press, 2017) and two story collections, including Blissful and Other Stories (Cosmographia, 2017) and is editor of Knowing Knott: Essays on an American Poet (Tiger Bark, 2017) and is a Pushcart Prize winner in fiction and an O. Henry finalist.
Janis Joplin’s Cowbell

Pearl was every kind of fire

I still smell her fingers
all smoky and urgent

gripping me
the way she clutched at life

doubt
the men who played her

She was the region between
drumstick and silence

I was her flint

Forgotten
on this shelf

I bear her brand
on my flank

From PSYCHOMETRY by Georgia A. Popoff
Smithsonian
The Bp Butler Society Ltd has joined a program for placing the Smithsonian Magazine in schools.

Update: We are unhappy with the Smithsonian’s inability to distinguish our Society from The Butler Society, which deals with the surname as a whole and not just Bishop Joseph. Therefore, we have decided to withdraw from this otherwise worthy program.


John Wesley
Encounters with John Wesley brings to life the legendary preacher’s search for faith, his tireless travelling, the violent opposition he faced, and his passionate, single-minded drive‘to do what good I can’  Mark Topping is John Wesley. His father, Frank Topping appears as Joseph Butler, the Bishop of Bristol, Alan Covenay is Charles Wesley, and Alan Moore appears as Beau Nash. Filmed on location—including the New Room, Bristol, the oldest Methodist chapel in the world and at Charles Wesley’s House, also in Bristol. Encounters with John Wesley” runs for 25 minutes with 'extras' for a total DVD running time of 90 minutes. Mark Topping and Bristol Film and Video Society, 2008.
Frank Topping has been nominated for the Bishop Butler Society’s annual award for 2020 for his portrayal of Bishop Butler in this film. 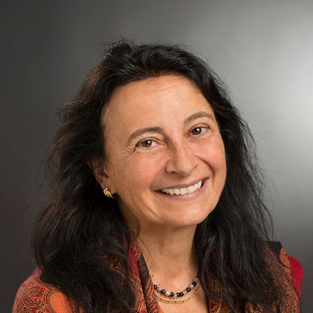 Professor Silvia Benso
Silvia Benso has been Professor of Philosophy at RIT since Winter 2008. After doing her undergraduate work in philosophy at the University of Torino, Italy, and studying in Germany for almost two years, she graduated with a Ph.D. in philosophy from Penn State University, USA.
Among her areas of interest and specialization are ancient philosophy, contemporary European philosophy, the history of philosophy, ethics, aesthetics, and feminist theories. Besides having published articles on Nietzsche, Heidegger, Levinas, and ancient philosophy (especially Plato), she is the author of Thinking After Auschwitz: Philosophical Ethics and Jewish Theodicy (in Italian), The Face of Things: A Different Side of Ethics, Viva Voce: Conversations with Italian Philosophers, and the co-author of the volume Environmental Thinking: Between Philosophy and Ecology (in Italian).
She has also co-edited the volumes Contemporary Italian Philosophy: Between Ethics, Politics and Religion; Levinas and the Ancients; Between Nihilism and Politics: The Hermeneutics of Gianni Vattimo; and Thinking the Inexhaustible: Art, Interpretation, and Freedom in the Philosophy of Luigi Pareyson. She is the general co-editor for the series Contemporary Italian Philosophy published by SUNY Press and the co-director for SIP—Society for Italian Philosophy.
​

Internet, Social Media, and E-Texts, a division of labor

Bishop Joseph Butler
@damcnaughton on Facebook or in Messager 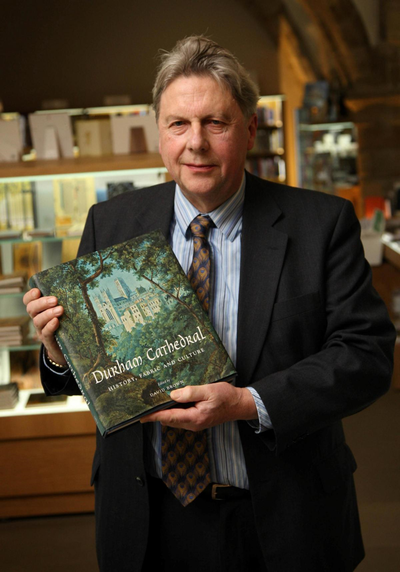 ​Books for Sale
THE ANALOGY OF RELIGION, NATURAL AND REVEALED, TO THE CONSTITUTION AND COURSE OF NATURE.... Millard Fillmore's Copy Signed by Him
Price: $1,250.00

New York: Robert Carter,1848. First Edition Octavo (5-3/4" x 9") bound in publisher's brown blind-stamped cloth, gilt lettering on the spine; 312, [8] pages. SIGNED and dated 22 March 1850 with a price of $1 vertically on the front pastedown by the thirteenth President of the United States while in office. Fillmore has also written the notation F — 1 on the top of the title page, a notation he used on books in his personal library to denote the room and shelf where the book was stored. An especially large and attractive signature. Moderate foxing, some rubbing and staining to the front cover. Very Good (Item ID: 018447)
Millard Fillmore was an avid reader and book collector. Fillmore established the first White House Library. When he moved from Washington, he relocated his library to Buffalo, NY. After his death in 1874, his large library was sold by his son.
Charles Agvent  Book number: 018447
https://www.charlesagvent.com/shop/agvent/018447.html
Note: Neither the Bishop Butler Society nor any of its members has an interest in the sale of this book.  We thought this commercial notice might be of interest to readers of “The Cool Hour”.
​
Modern Theology 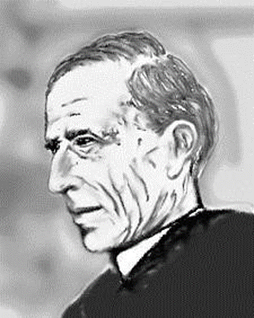 L. John Cieslinski delivers a compelling performance as this twentieth-century philosopher, theologian, paleontologist, and priest. Discouraged by the Vatican's efforts to silence him for his views on evolution and his order's heavy-handedness in dealing with him, Teilhard confides his feelings to a friend. He fights with his frustrations and unwillingness to leave the Jesuits, and only wishes to show the Church that there is nothing to fear from science. Additional productions are planned and will be advertised in your local listings.
John runs the monthly discussion group “Philosophy and Spirituality,”  hosts a birthday party for Bishop Butler on or about May 18 each year, and is the author of Please Don't Read These Poems: They Come From the Mind of a Demented and Perverted Poet Who Is Only Interested in Riches and Fame  (Paperback – July 24, 2017)

What is a Bishop Butler Society?

BISHOP BUTLER SOCIETY LTD (DOS ID 3741128) is a corporation registered with New York State Department of State (NYSDOS). The initial filling date is November 10, 2008.
Domestic Not-For-Profit Corporation   Address: 35 Luella Street, Rochester, New York 14609. The Society aims to make Bishop Butler better known for the benefit of all and entertains the vision that duty and interest converge if not now at least in the end.

Some Publications (on Butler by people associated with the BpBS) .[1]


The BpBS is a non-membership, not-for-profit corporation in the State of New York (est. 2008). By the terms of our charter we own no property other than the corporate office and its furnishings, and are prohibited from maintaining a library, museum, or archive. We are not tax exempt.  We do not charge tuition, do not give “credit” (for papers submitted or for time served), and do not grade with letters or numbers.  We do follow the George Soros rule of being as critical of ourselves as we are of others, another instance of blatant plagiarism from Bishop Butler. Since we are not a membership corporation, we do not conduct membership drives, collect dues, or maintain a mailing list.  What we have to say to any who have ears is presented in various groups that meet in and around Rochester (NY), to more or less organized professional and popular organizations, in our newsletter (The Cool Hour), and posted to bishopbutler.org. The BpBS does not solicit donations from outsiders or apply for grants from funders such as the Templeton Foundation. Those associated with or implicated in the BpBS are expected to self-fund their projects consistent with our mission of making Bishop Butler better known to all for the benefit of all.

[1] To redact, in its earlier sense, was more to edit than to censor. As scholars we want it all: the full collection of evidence, transcribed, transliterated, translated, digitalized, all bound as a variorum edition of text and notes and a critical reading edition to accommodate the needs and the budget of all who show an interest. As presenters we retain a selector who decides which portions should be on the program performed for a given audience. This newsletter is a report on a preliminary inquest into the decline of acquaintance with Bishop Butler, the general state of irreligion and unreason in which we are all implicated, and the pervasive anxiety, discontent and violence that comes with living in the secular alone with no hope of transcendence. Nothing is hidden, only arranged, and arranged to accommodate the habits of consumption that prevail among prospective readers.  An edition, (original, critical or variorum) is of use only if the readership is able to provide feedback by adopting the way of life advocated here, making that way of life their own and exhibiting the effect, which then becomes new and additional evidence, taking its place in the cumulative case in full as sketched in this report.

One Solution—Revolution            Power to the People       Philosophers solve the World; the Problem is to Change It
​Working on Philosophy is Working on Yourself    You must Change your Life.
​THOSE ASSOCIATED with the BISHOP BUTLER PROJECT
(however slightly or unwillingly) 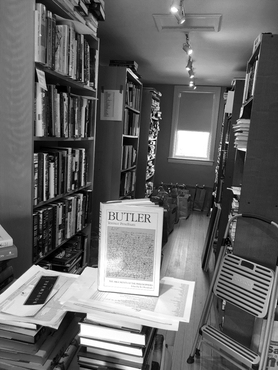 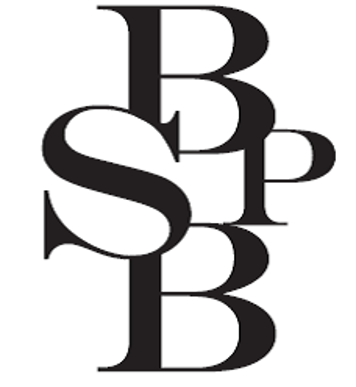